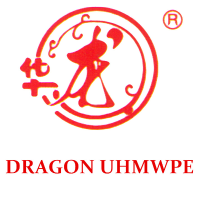 [Abstract]:
Ultra high molecular weight polyethylene(UHMWPE or UPE) is a kind of engineering thermoplastic polymerized by Ethylene and Butadiene Monomer under the effect of Catalyzer. Its molecular chain may cont

Introduction to UHMWPE
Ultra high molecular weight polyethylene(UHMWPE or UPE) is a kind of engineering thermoplastic polymerized by Ethylene and Butadiene Monomer under the effect of Catalyzer.
Its molecular chain may contain as-many-as 400,000 carbon units.
The molecular weight (MW) of UHMWPE is the MW of ethylene multiplied by the number of ethylene groups [(CH2=CH2⟹-(CH2-CH2)n] between 2 and 9.2 million g/mole. Since the begining of 2000s, There are first several factories used extrusion tecnique to produce UHMWPE pipe. DRAGON UHMWPE is among the first factories to extrude UHMWPE pipe.
At first, UHMWPE pipe is only applied as mining slurry transmission for its high wear resistance, low friction loss, anti-rust properties.
Gradually, the applications are more extended to dredging, power plant, chemical industry, conveyor systems, food and grain industry, crude oil transmission, water discharge and supply, etc.
Though the demand of UHMWPE pipe is increasing, the production capacity was not enough for the hard and slow extrusion of UHMWPE pipe for its extremely high molecular weight.
DRAGON specially researched on the resin and extrusion machines/mould, got the extrusion quality and speed imrpove at least 30% and build 24 producion lines to meet the martket requirement.
To improve the connection quality, DRAGON worked with its Australian partner to do automatically flanging machine and fusion connection.
Thus, the improvements together engaged DRAGON to be unique in UHMWPE pipe production. Application of UHMWPE pipe
Next article: